Are Western media systems becoming more American in the digital age? This is often thought to be the case, but Matthias Revers challenges this popular assumption with an nuanced study of contemporary journalism in the US and Germany, arguing that 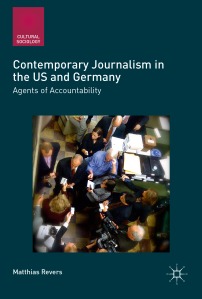 journalistic cultures are not only significantly different from each other still but also variably open and resistant to change. Drawing upon extensive field research of political reporters and examination of discourses of journalistic professionalism as well institutional analysis, Contemporary Journalism in the US and Germany finds that occupational norms and values of journalism in the US are vigorously upheld but in fact relatively porous and malleable. In Germany, by contrast, professional boundaries are rather strong and resilient but treated matter-of-factly. This, Revers contends, is both a consequence of institutional arrangements of media systems and historically evolved cultural principles of journalism in both countries which mutually constitute each other.

“This is first-rate scholarship. Cross-national studies of the news media are unusual; those based on ethnographic research are rare indeed. This rich, well-conceived, and deeply thoughtful work illuminates both German and American journalistic values and practices. It’s a treasure!”
Michael Schudson, Professor  of Journalism, Columbia University, New York

“Matthias Revers has written a terrific cross-national ethnographic study of political news reporting in two leading democracies. He draws out the similarities and differences between Germany and the United States with compelling observations and quotes, and he explains his findings with a sophisticated blend of cultural sociology and field theory. Revers is sometimes critical, but never cynical: one comes away from this book with a renewed appreciation of how much civic values still matter for journalists and why these normative commitments are important for all of us.”
Rodney Benson, Professor of Media, Culture, and Communication, New York University, and author of Shaping Immigration News: A French-American Comparison

“No one is foolish enough to think of news media as a transparent window into political action, but few consider the national differences in how the work that journalists do to construct mediated realities for their readers. This study of local political reporting in Albany and Munich unpacks German and American reporters’ beliefs about professionalism, objectivity and fairness to explain significant differences in how they walk the line between facts and opinion.”
Myra Marx Ferree, Alice H. Cook Professor of Sociology and co-author of Shaping Abortion Discourse

The chapter starts with an analysis of debates in leading US and German media outlets about the Snowden revelations about the difference between journalism and advocacy. It shows that these examples of journalistic metadiscourse are filtered through specific lenses of each occupational culture. The chapter then presents the theoretical framework of the analysis, which is mainly based upon cultural sociology and field theory. A quick discussion of the data and methods used in this study is followed by an overview of the book, including its main findings.

Chapter 1: Contextualizing US and German Journalism

This chapter situates journalism in its institutional and cultural context in Germany and the United States. On the institutional level, it compares the two media systems, focusing particularly on market and non-market influences and professional organizational infrastructures of journalism. On the cultural level, it examines the history of journalism and connects it to national repertoires of evaluation. The chapter suggests a pervasiveness of market logics, weaker and more malleable professional boundaries, less occupational solidarity, and a more differentiated journalistic field in the United States. The influence of market and non-market heteronomies are more balanced in the German journalistic field, which is defined by a relative economic health, collectivist professional organization, and influence of politics, especially in the public service media sector.

This chapter focuses on scared discourse encapsulated in mythologies and articulated in moments of occupational consecration. The discourse analysis of journalism award statements and obituaries of journalists is followed by an examination of interview data of reporters of the two press corps engaging in occupational mythologizing. The chapter demonstrates a greater emphasis on the concrete social impact of journalism in the United States, corresponding to the image of the ideal journalist as a change agent of history. The German professional imaginary envisions less immediate impacts of journalism, focusing more on revealing wrongdoing and hidden aspects of our world and shaping public debates.

Chapter 3: Staking out the Boundaries of Professionalism: Good and Bad Journalism

This chapter maps US and German journalists’ definitions of occupational virtues and ideals, public responsibility, and boundary drawing between “good” and “bad” journalism. These pronouncements arose in research interviews, ethnographic observation of reporting practice and in public venues (metajournalism). US reporters stood out by engaging in much more self-examination in metadiscourse and drawing boundaries more assertively towards each other (implicitly and explicitly). Rhetorically, they strictly separated news and opinion, despite continuous softening of this requirement, and defined their public responsibility in terms of accountability journalism. German reporters stressed the importance of taking positions in the news and were more modest in articulating their responsibility to the public, more as Einordnung (contextualizing) and explaining issues than acting as a countervailing power of politics.

This chapter examines collective dynamics of German and US journalism. Even though competition and solidarity are realities of both groups of reporters, the analysis identifies the US case above all as a competitive press culture, the German case as an associational press culture. While US reporters thrive on competition, German reporters evaluate it as inherently negative. While US reporters contest associational structures, German reporters fall back on them. This difference accrues from varying strengths of market logics, individualism and collectivism, which also yield different kinds of pack journalism.

The specificity of the research setting–reporters embedded in political institutions–is utilized in this chapter to examine the maintenance of professional autonomy. Source relations constitute a continuous social drama for US journalists and involve meticulous signaling of professional boundaries (boundary performance) and perpetual adjustments of closeness and distance (boundary management), performatively and otherwise. German reporters treated their social context much more matter-of-factly, and their lives were not at all pervaded by the elaborate purification rituals their US counterparts took on. These findings reflect varying levels of historically evolved and symbolically significant institutional distances between media and politics. Yet, despite the consecrated distance, there were substantial deviations of this cultural consensus in the US press corps.

Chapter 6: Digital Media and the Diversification of Professionalism

This chapter focuses on resilience and change of professionalism with respect to digital media. For US reporters, the hybridity of traditional and online journalism did not only have practical implications but changed their professional self-understanding. Even though German reporters used the same media (except blogs), they had relatively little impact on their work and professional identity. Especially Twitter featured US reporters as susceptible to an ethic of transparency, even though it clashed with traditional occupational norms and their greatest defenders in the press corps. I conceive this shift in the US case as a diversification of professionalism.

Conclusion: Occupational Cultures and Journalistic Fields in Germany and the United States

The conclusion draws together key findings of the book, discusses its larger implications and breaks differences between the two occupational cultures of journalism down along six dimensions: subjectivity, interventionism, competition, relation to politics, digital media, and its larger role in democracy. The analysis finds vigorously upheld but relatively porous and malleable professional boundaries of US journalism which stand opposite the unagitated maintenance, strength and rigidity of professional boundaries in German journalism.